The Qur’an, as the last revealed book of God,was revealed .incrementally over a period of some 23 years, beginning in the month of Ramadan, when Muhammad was 40; and concluding in the year of his death. Muslims regard the Quran as Muhammad’s most important miracle, a proof of his prophethood, and the culmination of a series of divine messages starting with those revealed to Adam, including the Tawrah (Torah), the Zabur (Psalms) and the Injil (Gospel). The word Quran occurs around 70 times in the text itself, and other names and words are also said to refer to the Quran.[

Allah himself guaranteed the preservation of Qur’an

Allah Himself guaranteed its preservation. The entire Qur’an was recorded in written form during the lifetime of the Prophet Muhammad (PBUH),is still extant in its original form, on pieces of palm leaves, parchments, bones, and other suitable surfaces.

Moreover, there were tens of thousands of his followers who memorized the whole Qur’an, and the Prophet himself used to recite it to the angel Gabriel once a year and twice when he was about to die. After the Prophet’s death, Abu Bakr, the first caliph, oversaw the collection of the Qur’an into one volume by the Prophet’s scribe, Zaid Ibn Thabit. This volume remained with Abu Bakr who, when he was about to die, entrusted it to his successor, Umar Ibn al Khattab who, in turn, passed it on to Hafsa, the Prophet’s wife. It was from this original copy that Uthman, the third caliph, prepared several other copies and sent them to different Muslim territories.

The Qur’an was preserved so meticulously because it was to be the book of guidance for all humanity forever. Thus it does not address only the Arabs, even though it was revealed in their language. It speaks to man as a human being: “O Man! What has seduced you from your Lord?” The practical nature of the Qur’anic teachings is established by the examples of the Prophet and of pious Muslims throughout history. 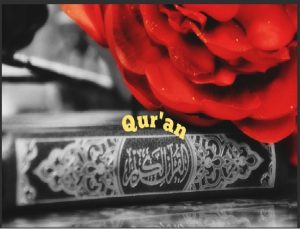 The Qur’an instructions are aimed at the general welfare of man and are based on possibilities within his reach. Its wisdom is conclusive in all of its venous dimensions. It does not condemn or torture the flesh, nor does it neglect the soul. It does not humanize God nor does it deify man. Everything is carefully placed where it belongs in the total scheme of creation.

Those scholars who allege that Muhammad wrote the Qur’an claim something that is not humanly possible. Could anyone living in the sixth century CE. utter such scientific truths as the Qur’an contains? Could he describe the evolution of the embryo inside the uterus so accurately that it matches the description given by modern science?

Secondly, is it logical to believe that the Prophet, who, until the age of forty, was known far and wide for his honesty and integrity, began all of a sudden to write a book that is without equal in literary merit and that could not be surpassed by the whole legion of the Arab poets and orators of the highest caliber?

And lastly, is it justified to say that Muhammad (PBUH), who was known to his people as al-Amin (The trustworthy) and who is still admired by non-Muslim scholars for his honesty and integrity, came forth with a false claim and on that falsehood trained thousands of individuals of character, integrity, and honesty who were able to establish the best human society that the world has ever known? Surely, any sincere and unbiased searcher of truth will come to believe that the Qur’an is the revealed book of Allah.

Quotations on Islam from Notable Non-Muslims

Without necessarily agreeing completely with their statements, we would like to quote some of the opinions of important non-Muslim scholars who have studied the Qur’an. Such comments show that the non Muslim world is taking a more serious view of the Qur’an and that it is beginning to appreciate its truth. We appeal to all people who are seeking spiritual truth to study the Qur’an in light of the aforementioned points. Cast your preconceived notions aside and listen and read what these people have to say.

Adolf Hitler (1889 – 1945) was an Austrian-born German politician and the leader of the National Socialist German Workers Party, commonly known as the Nazi Party.

“You see, it’s been our misfortune to have the wrong religion. Why didn’t we have the religion of the the Mohammedan religion [Islam] too would have been more compatible to us than Christianity. Why did it have to be Christianity with its meekness and flabbiness?”

Antony Garrard Newton Flew (1923 – 2010) was a British philosopher. He was also known for the development of the no true Scotsman fallacy.

“I would never regard Islam with anything but horror and fear because it is fundamentally committed to conquering the world for Islam… it is, I think, best described in a Marxian way as the uniting and justifying ideology of Arab imperialism. Between the New Testament and the Qur’an there is (as it is customary to say when making such comparisons) no comparison. Whereas markets can be found for books on reading the Bible as literature, to read the Qur’an is a penance rather than a pleasure. There is no order or development in its subject matter”

Edward Augustus Freeman (1823 – 1892) was an English historian, architectural artist, liberal politician during the late-19th-century heyday of William Gladstone, and a one-time candidate for Parliament.

Edward William Lane (1801 — 1876) was a British Orientalist, translator and lexicographer. Lane’s Arabic-English Lexicon remains the world’s most revered and scholarly dictionary of the Arabic language.

The tax that is taken from the free non-Muslim subjects of a Muslim government whereby they ratify the compact that assures them protection, as though it were compensation for not being slain